SEMIRAMIS -"Queen of Heaven""Mother of god" 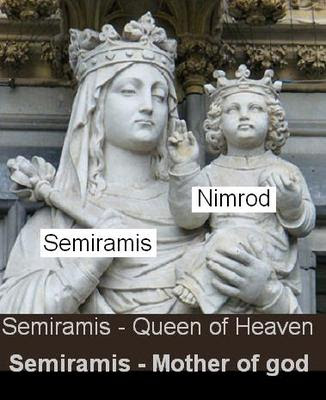 SEMIRAMIS -"Queen of Heaven""Mother of god"
"Semiramis became known as the "queen of heaven," and was the prototype from which all other pagan goddesses came."--World Religions by David Terrell
"Semiramis, in particular was the model and original of every goddess and female cult figure in the ancient and modern worlds."--SEMIRAMIS, QUEEN OF BABYLONby Bryce Self
Madonna and Child
"Nimrod and his mother (Semiramis)became the chief entities of worship as a Madonna and child. This belief and practice spread to Egypt, where the names of the gods were Isis and Osiris. The son Osiris was born December 25. In Asia it was Cybele and Deonius. In Rome they were called Fortuna and Jupiter. Throughout the world we still find the remnants of mother and child worship to this day. It is no surprise that this same system still exists at the end of the age. It is called "Mystery Babylon" (Rev 17:5). Shockingly, it is disguised as Christianity and is still practiced in the celebration of Christmas."--The Bible as History by Werner Keller
Worship of mother and child spread from Babylon to the ends of the earth, but were called different names in the languages of the various counties where their worship appeared.
"Semiramis and Horus/Tammuz were worshipped as "Madonna and child." And as the generations passed, they were worshipped under other names in different countries and languages. Many of these are recognizable - such as -Fortuna and Jupiter in Rome; Aphrodite and Adonis in Greece and Ashtoreth/Astarte and Molech/Baal in Canaan."--Syncretismas!by Martin G. Collins Forerunner, December 1995
The ancient Germans worshipped the virgin HERTHA with the child in the arms of his mother. The Scandinavians called her DISA pictured with her child. In Egypt, the mother and her child wereworshiped as ISIS with the infant OSIRIS or HORUS seated on his mother's lap.In India, the mother and child were called DEVAKI and KRISHNA, and also ISI and ISWARA as they are worshiped to this day.In Asia, they were known as CYBELE and DEOIUS; in pagan Rome, as FORTUNA and JUPITER-PUER, or the boy JUPITER; in Greece, as CERES, the great mother with babe at her breast, or as IRENE,the goddess of peace, with the boy PLUTUS in her arms. Even in Tibet, China, and Japan, Jesuit missionaries were astonished to find the Roman counterpart of MADONNA and child. SHING MOO, the holy mother in China was portrayed with a child in her armsand a glory (halo - nimbus) around her.
Semiramis was worshiped in Ephesus as the pagan fertility goddess DIANA who represented the generative powers
The Many Names of Semiramis 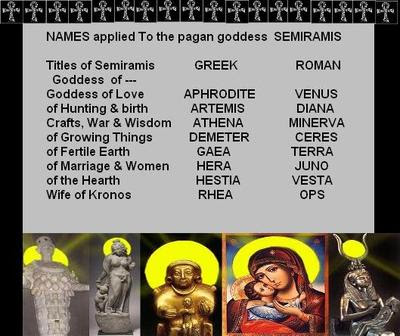 Semiramis - The Wife of Nimrod is also known under various aliases,


Semiramis - Isis - and Mary
"Isis was often represented standing on the crescent moon, with twelve stars surrounding her head. In almost every RomanCatholic church on the continent of Europe may be seen pictures and statues of Mary, the "Queen of Heaven," standing on the crescent moon, her head surrounded with twelve stars."-From Bethlehem to Calvary - Chapter Two Alice Bailey"Goddess veneration of the "virgin with child" has been a central belief for various societies throughout history, including some aspects of Christianity. Indeed, many leading occultists see striking parallels between the Roman Catholic "Virgin Mary"–the "Queen of Heaven"–and the goddess Isis. And the comparison is startling. Presently, Roman Catholicism holds Mary to be eternally virgin, just as Isis was. Catholicism also contends that Mary was without sin, making her into a type of "god." In fact, there are some who claim that Mary is the "fourth person" within the Trinity. This belief is linked to Catholicism’s claim that Mary now has a direct say in mankind’s salvation through her role of co-redemption and mediation. Hence, the elevated Mary becomes a "goddess" in the Catholic faith, just as Isis was a goddess in the pantheon of Egyptian deities. And just as Isis was (and still is) called "Mother of the World" and "Queen of Heaven," so too Mary is now exalted with these same titles."-Isis: "Queen of Heaven"by Carl Teichrib
"The logical person to replace the Great Mother of paganism was Mary, the mother of Jesus. It mattered not to pagan Rome whether they worshiped the goddess mother and her child under the Egyptian names of Isis and Horus,or the Babylonian names of Semiramis and Tammuz, or the Roman names of Venus and Jupiter, or under the names of the "Virgin Mary" and the "Christ- child.". Either way, it was the same old idol-religion."--Baal-mas
Where did Christmas Come from? Tom Adams 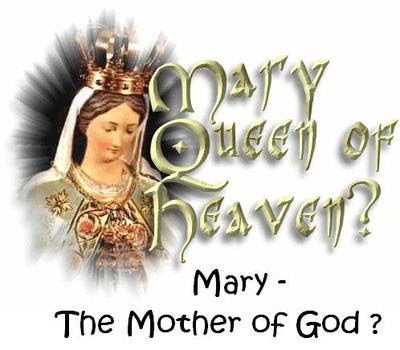 "The cult of the Mother Goddess entered the Christian Church...and it was a long and confusing process until Mary was declared to be the Mother of God. This is a principle which Christianity inherited from its pagan forerunners."-Stephen Benko (1993) The Virgin Goddess: Studies in the pagan and Christian roots of Mariology. Leiden: E.J. Brill. p. 5

A proper perspective of Mary.

Obviously Mary was a good Jewish woman,otherwise, Jehovah God would not have chosen her to bear his son. But many of the claims about her and the attitude that some showin reference to Mary, are simply unfounded.

There is no basis in the Bible, that we shouldpray to Mary. The Bible makes it clear that we should only pray to the Father, Jehovah God.

The fact that Mary bore other children after Christ was born - shows that she did have intercourse with her husband, and was not a virgin forever.Mary was the virgin mother of Jesus, the Son of God, but she did not remaina virgin forever. Mark 6:3 actually lists four of Jesus’ brothers and mentions sisters as well. Nor was the Biblical Mary sinless. Romans 3:23 makes it clear that "all have sinned"–which would alsoinclude Mary. Also, the Bible hasrecorded that Mary offered sacrificesat the temple to atone for her sins.

The fact that very little is said about Maryin the Bible - certainly downplays her importancein our worship and our spiritual life. In fact,the few times that Mary is mentioned, it appearsto be in somewhat of a negative light. How So?

Mary's son - the Messiah - reprimanded her when she attempted to tell him what to do, at the wedding, where he turned the water into wine.

Also, Mary attempted to interrupted Christ, when he was giving a discourse to his followers.When he was told that his mother and brothers wanted to speak with him - he basically refusedand then compared the audience to being his real and true Mother and brothers and sisters.Yes, In front of the crowd, he said that those people in his audience - who were doingthe will of His Father in heaven, were more important to him, than his mother, his sisters, and his brothers. By saying this, it appears that Christ was implying that his mother, was not doing God's will. Why was Mary not sitting in the audience listening to her son ? Could it be that she did not put any Faith in him ? Perhaps Mary was not one of his followers?

After Christ's tortuous death, there is not one single mention of his mother in the Bible again.If she was of so much importance - as some sectsof Christendom claim - then why is there no mention of her again in the Bible ?

History books and theological records all pointto the fact that Mary was adopted by the apostate church as a replacement for their Mother/Son goddess worship of pagan Rome, whose roots liein Ancient Babylon, with Semiramis - The wife and mother of Nimrod.

"Just then his mother and brothers showed up. Standing outside, they relayed a message that they wanted a word with him. He was surrounded by the crowd when he was given the message, "Your mother and brothers and sisters are outside looking for you." Jesus responded, "Who do you think are my mother and brothers?" Looking around, taking in everyone seated around him, he said, "Right here, right in front of you—my mother and my brothers. Obedience is thicker than blood. The person who obeys God's will is my brother and sister and mother." (Mark 3:31-35)(MSG)-BibleGateway

There is Only One Mediator between Mankind and God

"For there is one God and one mediatorbetween God and men, ' the man' Christ Jesus, who gave himself as a ransom for all..."(1Timothy 2:5,6)

"For there is only one God and one Mediator who can reconcile God and people. He is the man Christ Jesus."(1Timothy 2:5)(NLT)-BibleGateway

The "Queen of Heaven"Jehovah's Viewpoint

The "queen of heaven" is a very ancient, and very modern, pagan religious term that is described in the Scriptures as the worship of the Babylonian idol Ishtar also known as Astarte and Ashtoreth.

What Did God Say About The "Queen Of Heaven"?

"The children gather wood, the fathers kindle fire, and the women knead dough, to make cakes for the queen of heaven; and they pour out drink offerings to other gods, to provoke me to anger."(Jeremiah 7:18-19 RSV)

"The children gather wood, and the fathers kindle the fire, and the women knead the dough, to make cakes to the queen of heaven, and to pour out drink-offerings unto other gods, that they may provoke me to anger. Therefore thus saith the Lord Jehovah: Behold, mine anger and my wrath shall be poured out upon this place...."(Jeremiah 7:18-20)(ASV)-BibleGateway